How To: The deal forecast in Teamleader Focus

The forecast page of your deals in Teamleader Focus helps you follow up on your sales opportunities even more quickly and efficiently than before. In one overview you’ll get an idea of your expected revenue in the upcoming three months. At a glance you can also find deals without a close date and easily drag them to the month in which you expect the deals to close. Discover all about the deal forecast here!

First of all, you can find the deal forecast by navigating to Deals and Quotations > Forecast. Based on the current open deals, you can find an overview of your expected revenue 3 months ahead.

Each month shows you a calculation of the total expected revenue. How this is calculated exactly will be explained later in this article. Below 'Total expected revenue', next to ‘Open’, you can find the amount of deals with a close date currently in that month. Moreover, you’ll find the total amount you could win if all deals are closed.

The deal forecast calculations (‘Total expected revenue’) rely of course on the amount of the deal, but also on both the close date and the probability of your deal. To fill out or change these last two fields, follow these steps and finetune your deals immediately:

You can also change the amount of a deal by clicking on View detail. 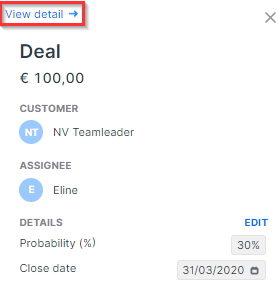 This leads you back to the deal overview page, where you can click the pencil next to the deal to change the amount.

On the left hand side of your deal forecast, you can find deals with the 'Date passed/missing'. These are deals that are still open, but:

We point these deals out to you based on:

When you’ve optimized your forecast, it’s time to focus on how the revenue is actually calculated.

The deal forecast focuses on how many deals you can close this current month, or in one of the upcoming 2 months.

Each month you’ll see at a glance the revenue you can expect to win in that period:

You’re also able to seamlessly filter based on deal assignee. You can find this filter in the top right-hand corner of your deal forecast.

This makes it possible to see for example: