FAQ: What information do the deal stats provide?

At Teamleader Focus, we want to help you get the most out of every deal you make. This is where the deal stats come in. Just go to 'Insights' in your overview, and 'Deals' will come up as the first option.

Over here, you will find 11 different types of statistics. Understanding these will help you gain valuable insights into your process of making and closing deals to eventually become a closing machine!

These different types are:

Note: Every type of statistic allows you to filter according to user or period. Click the little funnel in the top right corner to select which colleagues you wish to include, and select the period of time in the top left corner.

The tab 'deals' is divided in 3 options:

Note: the potential revenue is the amount with VAT excluded. 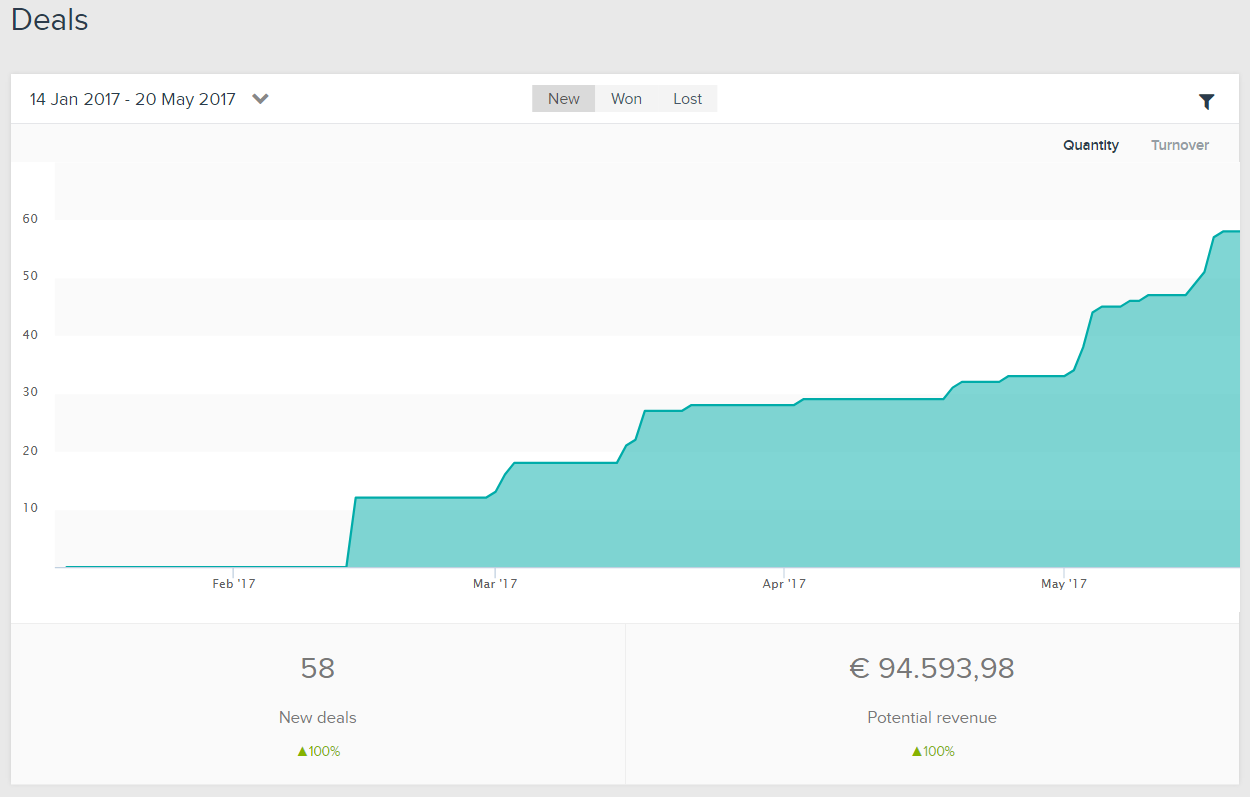 The funnel report lets you know how many deals that were added in a specific date, have been either accepted or refused by now. This way you can see in which phases the lost deals took place, and how many deals made it to the end.

In the example below, you can see that there were 10 deals created during that period, of which 3 were lost in two different phases, while the other 7 got the status Won.

This will help you determine where along the line you lose the most opportunities. To find out how to set your own deal stages, check out this article.

This diagram displays in what phase your ongoing deals are situated, as well as what those deals are worth. 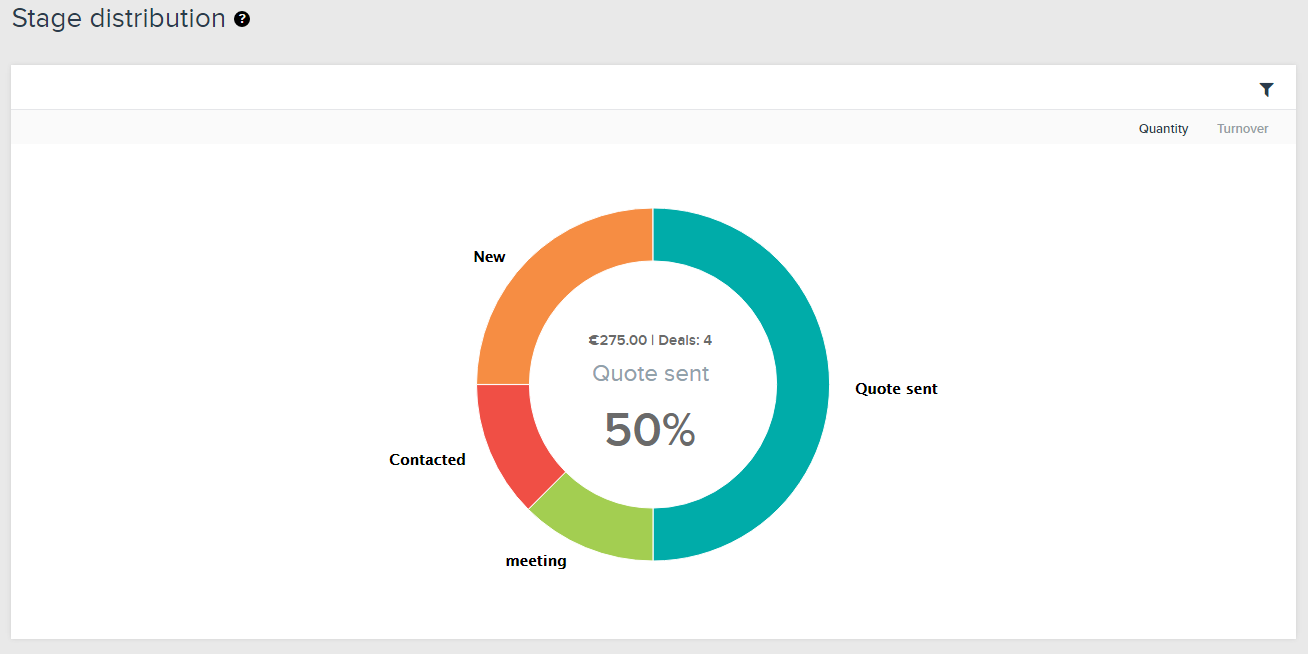 Time is money! You don't want a potential customer to be left waiting for you. This statistic allows you to keep track of the time it takes for you and your colleagues to respond to a new deal. 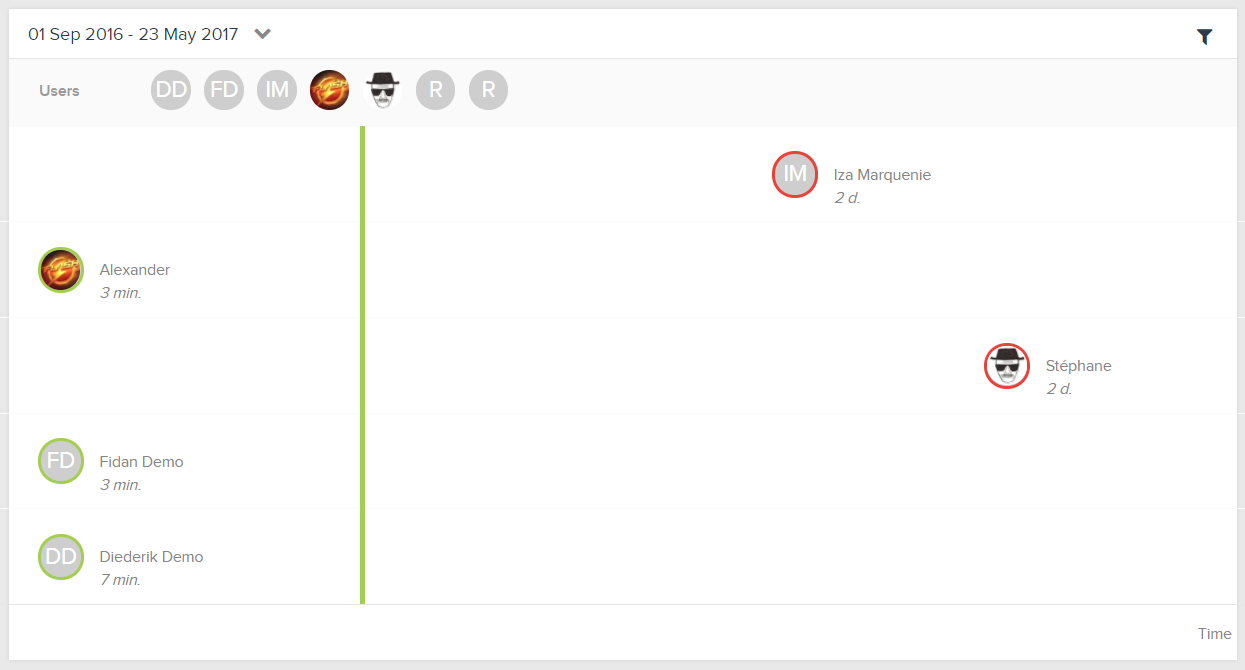 How many days do deals stay in a particular phase? Find out if any changes need to be made in order for the customer to make the transition to the next level more swiftly. 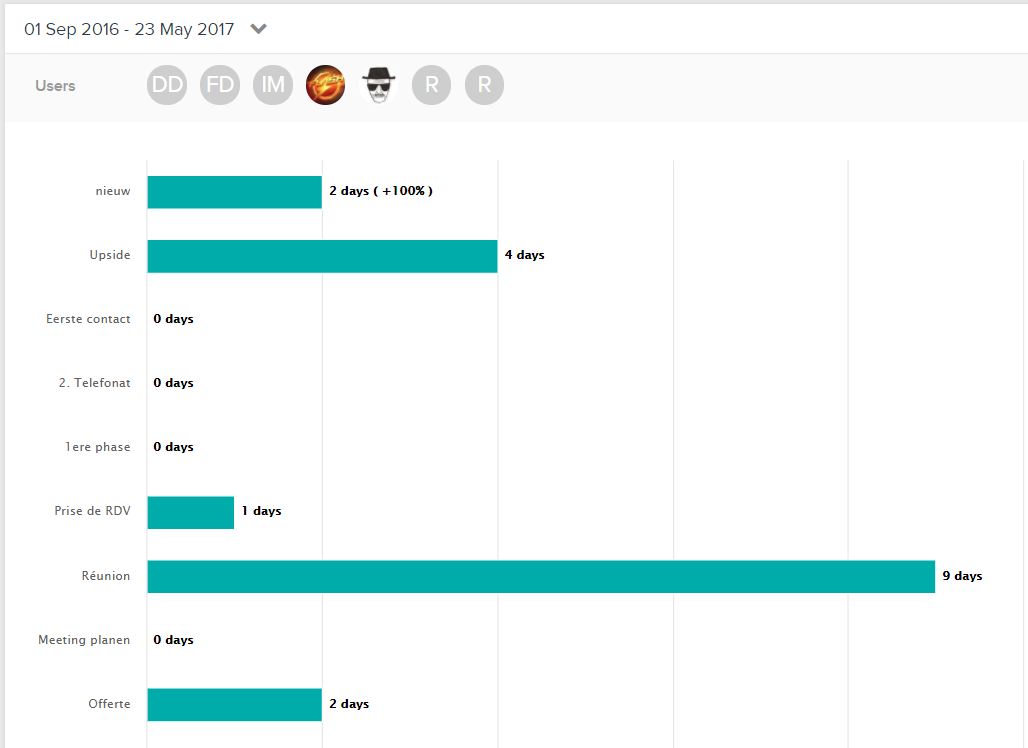 Note: The deals you see here are the ongoing ones. Those deals have a history of being for X amount of days in a certain phase. When you delete one of these deal phases in Teamleader Focus, the history of those deals remains unchanged. This is why it could be that you still see a deleted deal phase in there, because currently ongoing deals were once in that phase. This will fade out gradually as new deals no longer use this old phase.

The same statistic, but by user. Perhaps the reason deals stall at a certain phase has to do with the way an individual works, rather than the dynamics of the entire team. 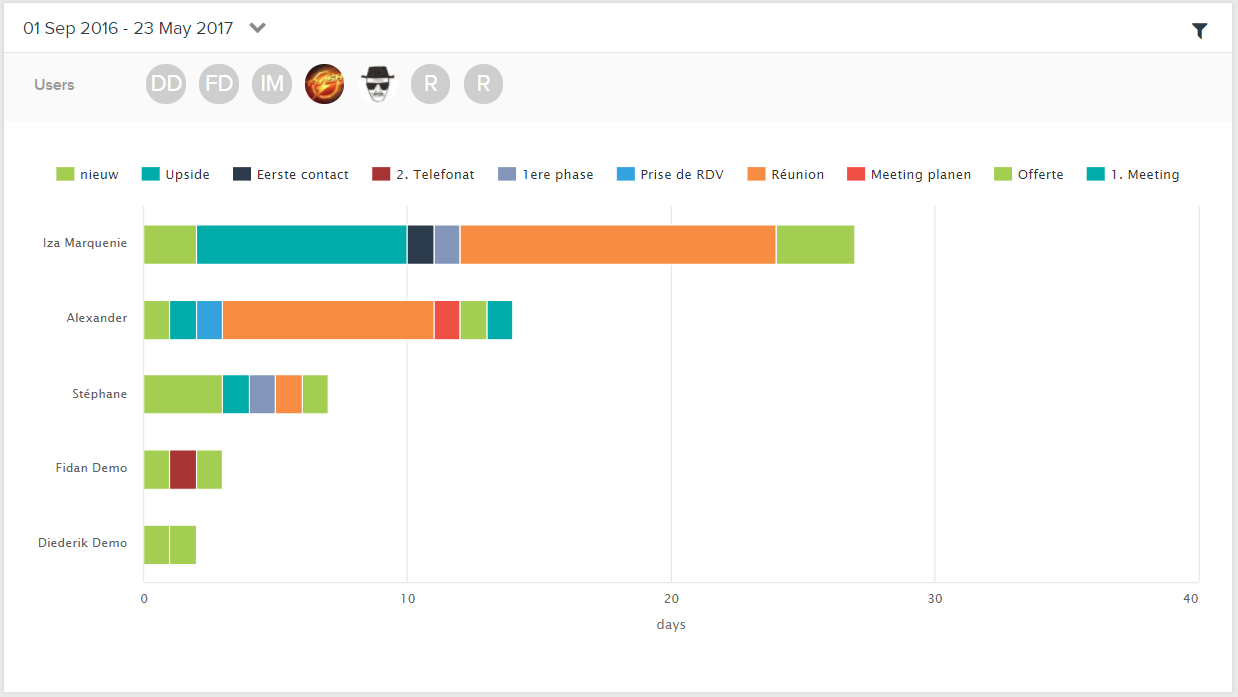 See where most of your deals come from and find out if there are any cities where you perform exceptionally well. 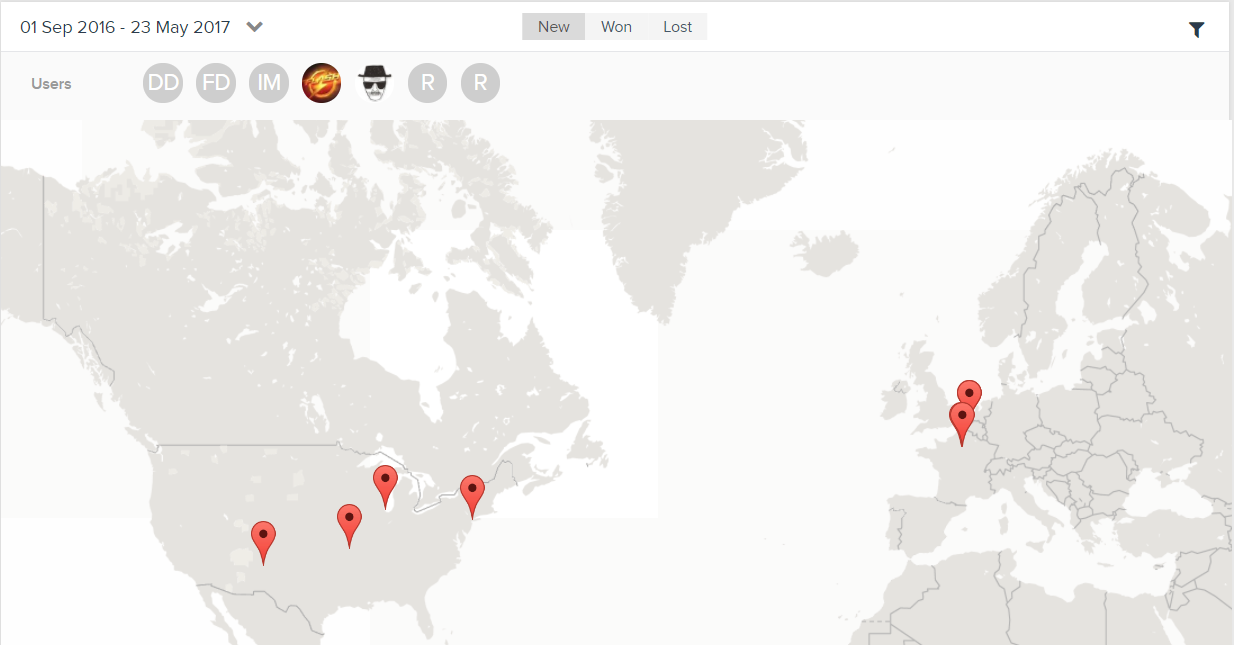 What part of your deals are made with companies that have worked with you in the past? 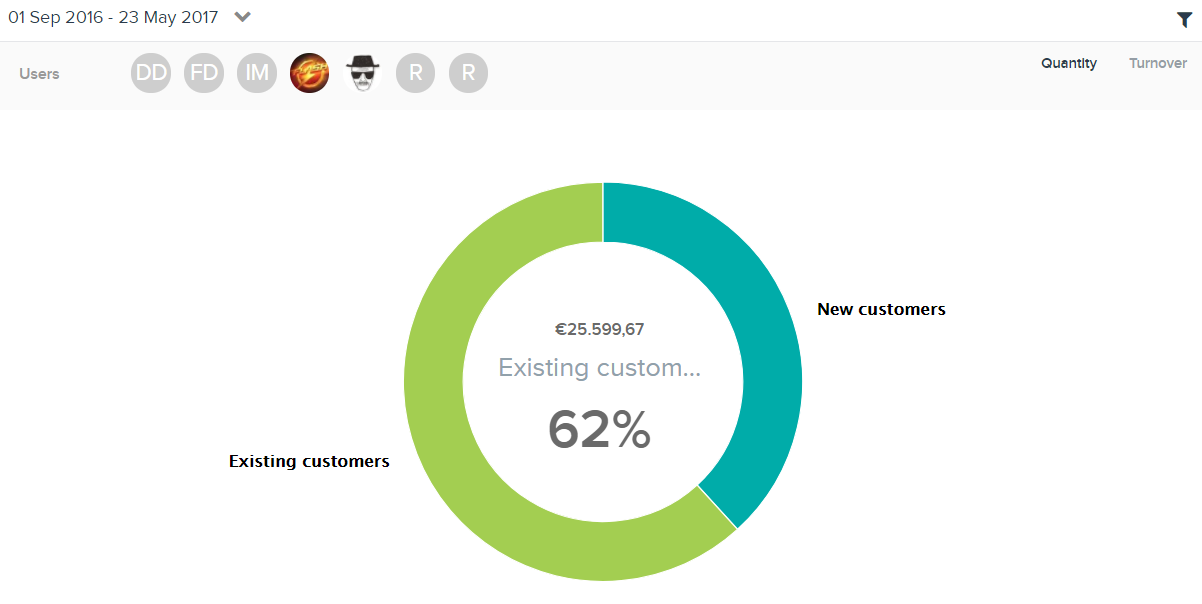 This diagram shows you the reasons why certain deals were not won. To manage the 'reasons for loss', go to 'Settings' >'Manage deal loss reasons'.

The probability of a user to bring his or her deal to the next phase. 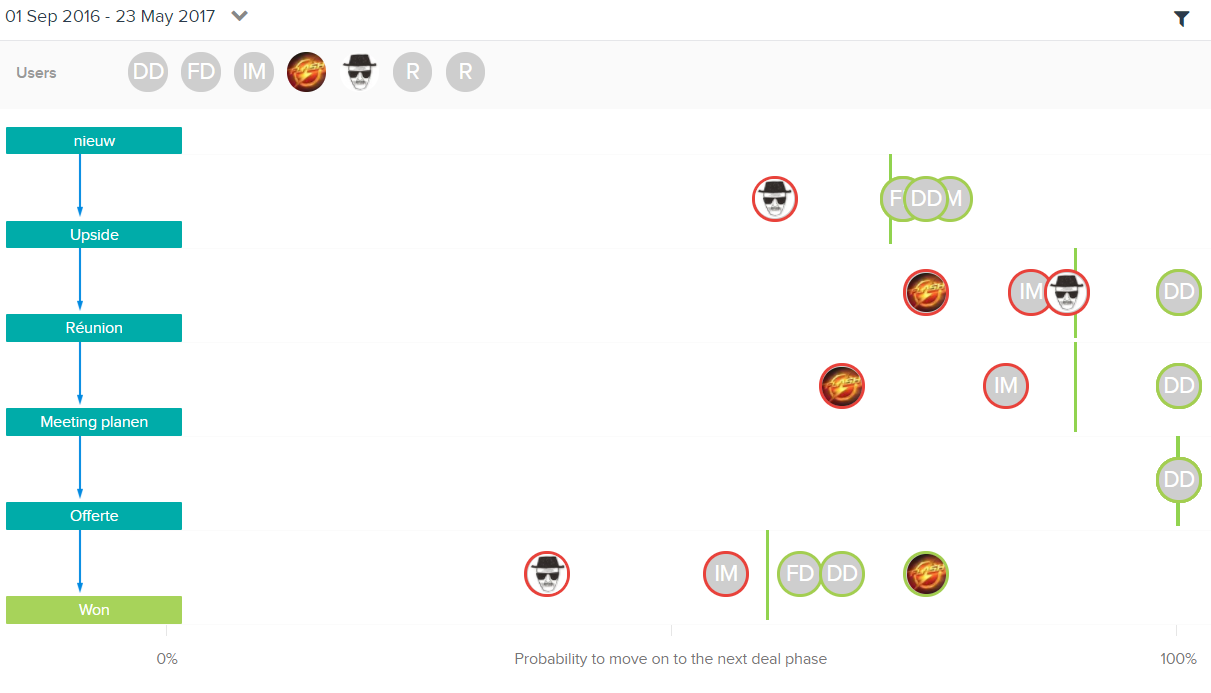 Gives you an overview of the origin of all your deals. Are opportunities mostly coming from your website? Or are you scoring particularly well at events? To manage your deal sources, go to 'Settings' > 'Add deal sources'.

There you go, these stats give you all the information you need to help yourself and your team improve your overall closing skills and reel in the deals!

PS: Looking for more information on the deal forecast in Teamleader Focus? Be sure to check out this article!